Neural Transfer Style is one of the most amazing applications of Artificial Intelligence in a creative context. In this Project, we'll see how to transfer an art painting style to a chosen image, creating stunning results. Leon A. Gatys et al. conceived the concept of Neural Transfer Style in their paper A Neural Algorithm of Artistic Style, in 2015. After that, many researchers applied and improved the methodology, adding elements to the loss, trying different optimizers and experimenting different neural networks used for the purpose.
Still, the original paper remains the best source to understand this concept, and the VGG16 and VGG19 networks are the most used models in this context. This choice, which is unusual considering that both have been outperformed by most recent networks, is proved by the highest performance achieved in style transfer.
You can check the GitHub Repository


How does it work?

The goal of this technique is to apply the style of an image, which we will call "style image", to a target image, conserving the content of the latter. Let's define these two terms:
The resulting effect is shown here:

First of all, we need to format our images to be used by our network. The CNN that we are going to use is the pre-trained VGG19 convnet. As we process the image into a compatible array, we also need to de-process the resulting image, switching from a BGR to an RGB format. Let's build two auxiliary functions to do this:

In the equation, F is the feature representation of the content image (what the network outputs when we run our input image through), and P the one of the generated image, at a specific hidden layer l.
Here's the implementation:

Understanding the style loss is not as straightforward as the content loss. The goal is to preserve the style of an image (i.e. visual patterns as brush strokes) in the newly generated image. In the previous case, we compare the raw outputs of the intermediate layers. Here, we compare the difference between the Gram matrices of specific layers for the style reference image and the generated image. The Gram matrix is defined as the inner product between the vectorized feature map of a given layer. The meaning of the matrix is to capture the correlations between features of a layer. Calculating the loss for multiple layers allow preserving similar features internally correlated in different layers, between the style image and the generated image.
The style loss for a single layer is calculated as:

Finally, the last component of the loss is the variation loss. This element is not included in the original paper, and it is not strictly necessary for the success of the project. Still, empirically it was proven that adding this element produces a better result since it smoothes the color variation between close pixels.
Let's include this:

Finally, the total loss is calculated taking into account all these contributions. First, we need to extract the output of the specific layers we choose. To do this, we define a dictionary as <layer name, layer output>: Then, we compute the loss calling the functions previously code. Each component is multiplied by specific weights, that we can tune to give intense or lighter effects:

Setting up the Neural Network

The VGG19 network takes as input a batch of three images: the input content image, the style reference image, and a symbolic tensor which contains the generated image. The first two are constant variables and are defined as Variable using the package keras.backend. The third variable is defined as placeholder since it will change over time while the optimizer updates the results. Once the variables are initialized, we joined them in a tensor which will feed later the network.
Once this is done, we need to define the loss, the gradients and the output. The original paper uses the algorithm L-BFGS as optimizer. One of the limitations of this algorithm is that it requires the loss and the gradients to be passed separately. Since computing them independently would be extremely inefficient, we will implement an Evaluator class that computes the loss and gradients values at once, but returns them separately. Let's do this:

Finally, everything is set! The last step is to iterate the optimizer multiple times until we reach the desired loss or the desired result. We'll save the result along the iterations, to check that the algorithm is working as expected. If the result is not satisfying, we can play with the weights in order to improve the generated image.

To see the whole code, please refer to the GitHub link provided at the beginning of the page. 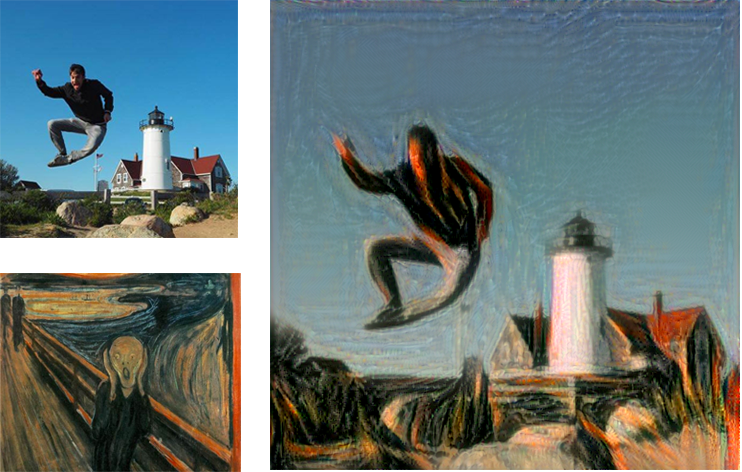